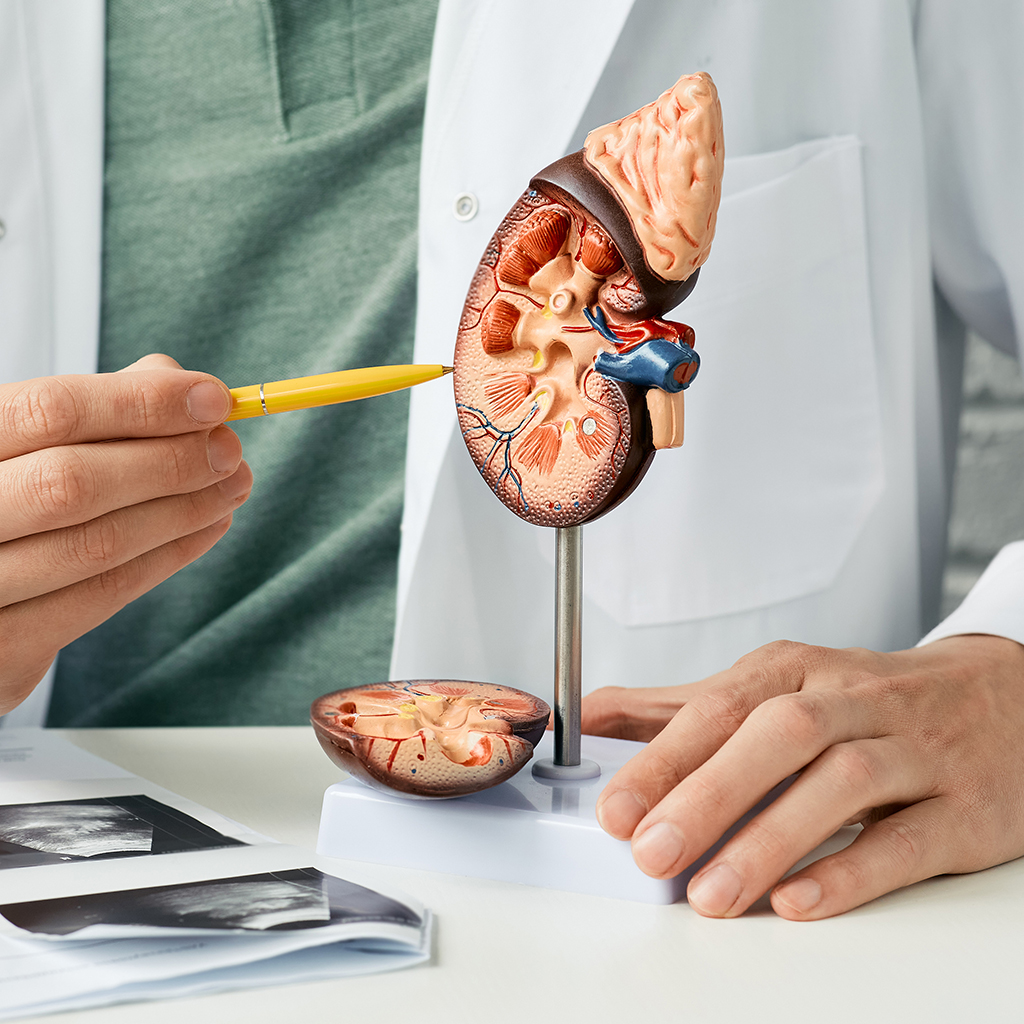 Adenocarcinoma, the most common form of kidney cancer, accounts for about 2% of all malignancies and mainly affects the male sex: out of 4,000 cases reported annually in Italy, 2/3 are male patients.

Surgery is the only effective form of therapy and now can be performed laparoscopically with significant advantages and identical outcome compared to traditional surgery. We discuss it with Dr. Alessandro Piccinelli, urologist from the Urology II Unit at the Policlinico San Marco.

At what age does the tumor occur?

Kidney cancer has a peak onset around the age of 60, although it increases among 40-year-olds and 50-year-olds:

"Thanks to the improved diagnostic techniques and the increasing application of ultrasound, which allows detection of kidney cancer at an early stage in asymptomatic patients, often as an occasional finding during an examination of the abdomen performed for other reasons," emphasizes the specialist.

"Only at an advanced stage the typical symptoms of the disease occur, mainly:

There are also other non-specific symptoms that may appear in kidney cancer, including:

There are different types of kidney cancer:

The main risk factor for the occurrence of kidney cancer, as with other forms of cancer diseases, is cigarette smoking.

"Other risk factors include:

There are, in addition, rare forms of kidney cancer within the context of genetic syndromes, predominantly Von Recklinghausen syndrome," Dr. Piccinelli notes.

Ultrasound and CT scans are the investigations normally used to diagnose this type of tumor.

"CAT (Computed Axial Tomography) scans in addition to helping to define the benign or malignant nature of the mass, provide information on the local extent of the tumor and the presence and location of any metastases that originate primarily in the lung, liver, bone, more rarely in the adrenal, other kidney, brain, spleen, intestines, and skin.

MRI, on the other hand, plays a very limited role in this field, and is useful in patients allergic to contrast medium and for determining particular diagnostic aspects in selected cases," Dr. Piccinelli explains.

From traditional to laparoscopic approach

Treatment of kidney cancer is represented exclusively by surgery, which plays a key role, both in localized and locally advanced and metastatic forms of cancer.

"In the latter case, following the removal of the kidney, the patient is subjected to drug therapies that are very effective today, some of which aim to activate the patient's immune system against the cancer," Dr. Piccinelli points out.

Generally, surgery involves complete removal of the diseased kidney, known as radical nephrectomy. In some cases, however, when the tumor is peripheral and does not exceed 4 cm in diameter, it is possible to remove only the diseased part of the organ, in which case it is called a partial nephrectomy.

Today, however, nephrectomy can be performed laparoscopically, that is, with a minimally invasive technique, by accessing the abdominal cavity through 3 small holes through which, with special instruments including a miniaturized camera called a laparoscope, the surgery is performed."

This technique guarantees the same results in terms of oncologic efficacy, as documented now in numerous scientific publications, and has definite advantages for the patient:

For these reasons, laparoscopic renal tumor surgery is the first therapeutic choice for the treatment of this neoplasm as also indicated by the guidelines of the European Association of Urology," Dr. Piccinelli continued.

The first laparoscopic kidney removal was performed in 1991 by American surgeon Klaiman. Since then, this minimally invasive surgical technique has spread to become routine at leading urologic centers and has been implemented with new instruments using ultrasonic and radiofrequency energies.

"Recently, 2 new technologies have been introduced:

Used together, these 2 technologies allow precise topography of the renal vasculature and tumor margins allowing the surgeon to act more precisely, radically, and with fewer complications.

Thanks to these technological innovations, it is now possible to address with videolaparoscopic techniques even renal tumors for which the use of the surgical robot was preferred in the past," Dr. Piccinelli concludes.

A new approach to treat glioblastoma multiforme and its relapses