Monoclonal antibodies and covid-19: what they are and how they work 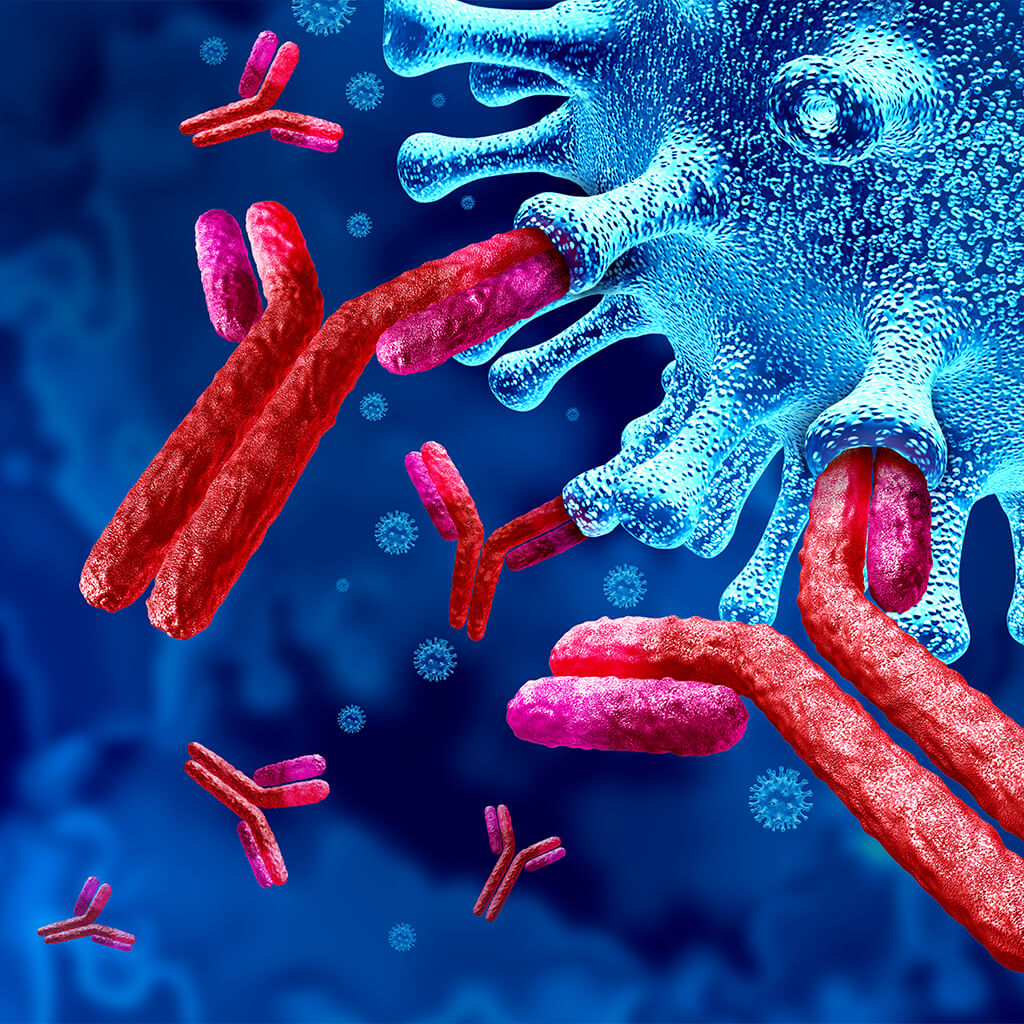 Monoclonal antibodies are drugs used in various fields. Lately there has been a lot of discussion about them in relation to COVID-19

After their administration to the former President of the United States of America Donald Trump, struck by Sars-Cov-2, there has been a lot of discussion about monoclonal antibodies as a possible cure against the new coronavirus. We deepen the topic with Professor Lorenzo Dagna, Chief of the Immunology, Rheumatology, Allergy and Rare Diseases Department at the San Raffaele Research Hospital and Consultant at the Casa di Cura La Madonnina, who explains what monoclonal antibodies are and how they work.

Antibodies are proteins produced by our immune system to defend us against something it deems dangerous. When, for example, we come into contact with a virus, antibodies go to bind to it:

Lymphocytes are the defense cells of the immune system that patrol our body. They are very numerous, as each of these is able to recognize only a single type of pathogen, or rather its single portion.

What are polyclonal antibodies

A virus or bacterium consists of multiple sections on its surface and can be identified in its various portions by different lymphocytes. For this reason, when the defense cells recognize it and, to better cope with it, begin to duplicate and produce antibodies; polyclonal antibodies (Ab) originate as they are many "clones" of lymphocytes of different types that have identified different sections of the virus, against which they will act.

What are monoclonal antibodies

If, on the other hand, we isolate the single lymphocyte that duplicates and produces antibodies that are all the same, we have monoclonal antibodies (mAb) that can be used to recognize a specific virus, bacterium or microorganism in its specific section and work to block it.

How monoclonal antibodies act against coronavirus

Monoclonal antibodies act against COVID-19 like natural antibodies, so they bind to the pathogen making sure that:

Monoclonal antibodies, generally speaking, can have a preventive function against the new coronavirus. If they are administered to subject who subsequently contract the infection, they can block the entry and duplication of the virus in the cells, inhibiting the development of the disease or otherwise causing a less serious disease.

However, as will be explained more fully in the following paragraphs, they do not represent an easy to apply solution on a large scale.

The treatment with monoclonal antibodies: when it is effective

As for a therapeutic use, Prof. Dagna explains:

“These antibodies have a very high efficacy in the early stages of infection, which are those most dependent on viral replication. Simplifying a lot, Sars-Cov-2 disease basically occurs in two phases:

In this last phase, even if you block viral replication, you probably won’t be able to benefit from it, as you have to deal with the effects related to the activation of the immune system. In this second phase, therefore, perhaps it is more important to reduce the excess immune response”.

The advantage of monoclonal antibodies is that they are a very specific therapy, with good success rates, as it is specifically built around the virus, but with efficacy only in the very early stages of the disease, as already mentioned.

Prof. Dagna recalls that the real disadvantage of monoclonal antibodies, which does not make them a tool of treatment and prevention for COVID-19 on a large scale, is represented by:

In fact, all monoclonal antibodies, including those developed against the new coronavirus, have a duration that, depending on the type in question, ranges from a couple of weeks to a few months, after which they are destroyed and further administration is required.

In addition to this, in the initial phase of pharmaceutical development, monoclonal antibodies have a very high cost, which can be thousands of dollars per single administration, as the production system is rather complex and, moreover, being drugs they must meet very high safety standards.

The vaccine seems to be the preferable solution as it has a more affordable cost of probable longer duration.

The administration of monoclonal antibodies is parenterally, in particular by means of intravenous infusions lasting a few hours. They cannot be introduced orally, as being proteins, they would be digested and destroyed.

Subcutaneous administration is possible, but in relation to COVID-19 it represents a technological advance for a later stage.

Since they are not chemicals, Prof. Dagna would not expect major side effects from the new monoclonal antibodies developed against COVID-19. In fact, if developed with the latest technologies, the side effects are generally minimal, but the administration of proteins intravenously can produce variable forms of reactions, ranging from fever to general malaise, even severe allergy.

Monoclonal antibodies can be of hundreds of different types. This diversity also shows the necessary dose and frequency of administration to treat a specific pathogen and the duration of the coverage offered: some bind and neutralize more, others less.

Current use for covid-19

In Italy, monoclonal antibodies for COVID-19 can be administered in the context of controlled clinical trials, active in various hospitals of the country.

Other uses of monoclonal antibodies

“Monoclonal antibodies can be designed to block not only infectious agents such as viruses, but any protein substance. For this reason, in the last 20-30 years monoclonals have been developed to hit different targets. For example, in rheumatology they are used to reduce inflammation and in oncology to block growth factors that are actively involved in the process of growth and spread of the disease,” concludes Professor Dagna.